Prepare for a Field Day on 1st January

We’re not even into the glorious month of December, where everyone is frantically searching for overpriced gifts, drinking too much eggnog and praying that extra piece of Christmas cake doesn’t turn into a few extra lbs on the stomach – oh what joy! Our Manor is getting booked up fast for next month as we have the best views of the New Year’s fireworks from Cremorne Point. But how about making plans now for the 1st of January when the mayhem dies down and the hangover rises up: Since you’ll be staying at our affordable boutique Sydney hotel, why not go the extra resolution mile and start New Year’s Day with a splash?

When we’re talking about a splash, we really mean a ‘get your 2017 adrenaline on the right energetic and healthy track’ type of event! Field Day Sydney is the place to be and located at The Domain, this event is now in its umpteenth year of success. Launching in 2002, the organisers decided to bring in the New Year with a bang: in the sun, enjoying the grassy gardens and smothering you in heart pumping indie, hip hop, house and electronic music. The festival is for ages 18+ and 2017’s line up is a who’s who: from Alison Wonderland to Booka Shade, Childish Gambino and Giraffage and around 30 other artists bringing a hippy hippy shake smile to your January face. That’ll burn off the December body weight for sure.

Tickets are $140 with VIP prices at $190. The entry cost may sound steep but remember, if you’re going to be celebrating the fireworks from Cremorne Point Manor, you’ve saved yourself a bundle on 31st December entertainment costs elsewhere in the expensive downtown district. And what better way to bring in 2017 than dancing through the day and evening. Also account that the event organizers are serious about environmental preservation with their sustainability policies, energy consumption, water usage and waste management. They guarantee you’ll have a great time while also paying forward to our planet so expect to see a mass array of recycling facilities. Dance on the grass, not on trash – that’s the new motto we just made up that perfectly describes Field Day. And your entry price helps Fuzzy Entertainment (the organisers) to donate trees to Centennial Parklands and Botanic Gardens in Brisbane, Adelaide and Melbourne.

The grounds will have a fully licensed bar (including non alcoholic drinks), alongside a flurry of food stalls to keep your energy levels on high alert. They’ll also offer free water, always a lovely H2O benefit, and bundles of merchandise for sale. If you’re a delicate musical wall flower, free earplugs will be available. 2016 is nearly SO last year and 2017’s Field Day should now already be on your calendar.
Posted by Mint Bridging at 11:43 AM No comments:

One of the year’s coolest festivals is the MotorWorld Sydney event from the 1st to 4th December. An event for all the family, it brings together the best interactive car enthusiasts passion of motors with a huge ‘I must be involved’ magnetic pull: you can test drive one of your heroic cars on the track, road or off-road circuit! Compare brands, models, the feel of the car, how you + the machine bond and if the pedal to the metal gives you the rush you were always praying for. Alternatively, you can check out those wish list cars through a series of demonstrations during the event if a test run is maybe a bit too much for you. Thinking this was the highlight of the event, there’s more:

When you buy tickets on the website, you not only confirm to participate in this first ever mega test fest, giving you priority access to the cars (remember that spots are limited) but…this event is most likely the world’s biggest test fest, and the first to collaborate with both the public and media (journalist) reviews. There will be around 10,000 test drives from over 100 cars through the four days.

And there’s even more…Test drivers can also be part of the CarAdvice test team. The website explains more information about this but it includes the public test drivers determining best categories of the cars on show, including the best compact SUV, best performance car under $60k and reviewing 4WD cars in the Dirt Drive on gravel tracks. You may be checking out firsthand the newest Tesla Model S or end up with the glory of all glories: Jaguar F-Pace. Who know what car you’ll be test driving. And here's something to think about... Entry prices are a reasonable $49 per day or $110 for a family pass. This includes access to all event activities, the Holy Grail test drives, live demos, competitions, entertainment for the family, live music and an outdoor cinema. Parking is free so that’s an extra bonus. And if you really want to end 2016 with a splash, for $290 per day, you can be a member of the VIP Grid Club, that features free food, drinks, priority access to the Sports Car Super Sessions and access to the Sun Deck.

There are many ladies day events including the Mamamia Women’s Choice Award, Ladies Day Exclusive Drive Experiences and Ladies Day Cocktail Party. We’re not sure why there are so many events for women aside the obvious: women always make the final decision on the next car purchase!

The event is located at Ferrers Road, Eastern Creek, NSW and it’ll only take you 50 minutes to drive there from Cremorne Point. Then return back to our stunning Cremorne Point Manor, switch the car for leg therapy and take a hike around our sensational walking trails. The cars, the speed and the motors at the festival will be phenomenal but the ride of your life will absolutely be from the adrenaline, as you view the most incredible Harbour skyline from our spot of the city.
Posted by Mint Bridging at 1:40 PM No comments:

A History of Aussie Christmas Traditions

Last week, we wrote a blog post about way-back-when Christmas in Australia’s historical moments defined how Aussies celebrate the latter part of December. Now onto the second and final part of memory lane, it’s good to know how tradition has served the country well during gift giving season.

With the southern hemisphere providing a warm summer down under during December, a senior historian confirmed this sunny Christmas style reverts back to the mid 1800’s. Early British settlers pined for home with snow filled streets but had to make the most of the warmer climate. Dr Brown (senior research fellow in the Australian National University’s History Program) confirmed that “from very early on, Christmas in Australia was a secular festival and about family; it focused on the outdoors, on recreation.”

Dating back to mid 19th century Britain, he says, Queen Victoria (or rather her husband, Prince Albert) seemed responsible for introducing the Christmas tree. This was in England in the 1840’s, yet the tradition was of German custom. Maybe you didn’t know this but at this same time, Christmas cards were also introduced. The overall focus was on family values, sentimentality and childhood.

Obviously Christmas existed way before then but was usually celebrated in church by way of sermons. Only until the 19th century did it become a public holiday and a family occasion outside of the church. 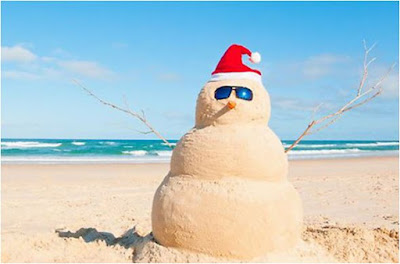 So even though the Aussies were greatly influenced by this British Christmas soiree, new Aussie locals decided to add a different flavour…literally. Around the 1950’s Aussies gave out Christmas cards with Santa pulled by a kangaroo instead and then headed to the bush, cutting down big swags of leaves (usually eucalyptus), tying them around the house.

Having an outdoor Christmas in the summery December, over the past century, is standard and the Aussies believe that it’s a ‘golden summer,’ with many of their heritage British traditions simply being tweaked to accommodate the climate and natural resources.

This year, if you’re celebrating Christmas in Sydney, not only do we encourage you to head to the beach and spend the 25th making snowmen sandcastles, but also enjoy some healthy Vitamin D on your skin while you sit back on our veranda overlooking Cremorne Point, and chomp on that ham & cockatoo pie. You’ll enjoy a holiday season that’s upside down, back to front and now reading this…it absolutely makes sense.  What a wonderful way to spend the holiday with us at Cremorne Point Manor!
Posted by Mint Bridging at 12:26 PM No comments:

With everyone now pushing hard for Christmas ‘where to go’ and ‘what to do’ attractions, we all know that the usual suspect tree lighting, carol singing and eggnog gluttony will take place.

So as with the Wonderful Life theme, we’re going down memory lane and recapping the best of Sydney’s history at this wondrous time of the year. Maybe you’ll find some events bring up your own experience of times when you impacted someone else’s life, or you get a booster of reliving those amazing memories you’ve now buried. Let’s go back to the past and see what stirs your neurological holiday season feel-good triggers:

The movie Bush Christmas, starring Chips Rafferty came out in 1947. Since then it’s been a TV staple, including the remake Prince & The Great Race with Nicole Kidman. Then there’s Miracle Down Under, with John Waters (telecast Bushfire Moon), which has been playing since 1987.

Since 1950, the Boxing Day Test on December 26th is a huge Aussie staple. Massively attended for over 65 years in the stadium and millions watching from their homes, it’s over half a century of tradition. Seeing and raising the Test match comes one of the planet’s most prestigious ocean races: Sydney to Hobart Yacht Race, also on Boxing Day from Sydney Harbour.

If warbling makes you go all Christmassy weak at the knees, the tradition of Aussie Christmas Eve carols including candles galore, was spearheaded in 1937 by Norman Banks, a radio announcer. When’s the last time you carol sung under a Christmas tree or went door to door, freaking out the neighbours by just tipping up without an invitation? How retro! 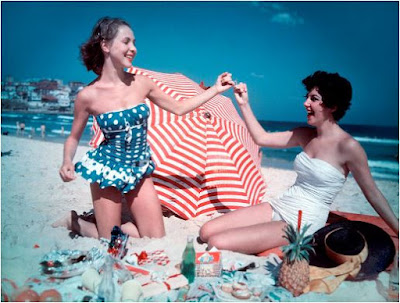 For decades, Sydney locals and tourists have been flocking to Bondi Beach, spending the 25th bouncing in the ocean and sand castling themselves into oblivion. Did you know that around 40,000 people visit this beach on Crimbo day?

Now you’ve experienced the holiday season Part 1, next week we’ll include more historic and unique Aussie centric Christmas blasts from the past. And remember that Cremorne Point has one of the BEST NYE firework viewing spots so we highly suggest you book your end of 2016 accommodation as soon as possible at Cremorne Point Manor. It’s a future history in the making!
Posted by Mint Bridging at 12:22 PM No comments: