Toy’ing With an Expo in Sydney?

On the 5th and 6th July, if you’re looking to tap into your inner kid excitement, the International Toy and Game Expo at the Dome, Sydney Olympic Park is the place to be!


As Australia’s only public expo all about games and toys, the whole family can enjoy two days of playroom heaven and the chance to test everything kid friendly.  From Chess Grandmaster to checking out the new Transformers Age of Extinction Movie Collection and even colour your bike in the Pop Bike Balance booth, it’s all fun and games at the Olympic Park.
Enter a chance to win a trip to Paris with the Days of Wonder Board Game booth or grab one of 30 places left in the Settlers of Catan Championship Tournament. Yep, this is the expo that beats all other related events in the area so make sure you have your A-game ready because there will be a TON of kids elbowing you out the way to view traditional and new technological products.
There are also a bundle of stage shows, a games library, activities for adults and kids, and awards. Presented by the Boardgames Australia committee, the awards include Best Australian Game, Best Children’s Game and Best International Game.
When it comes to the Spotlight Stage Shows, make sure you see AlakaSam, the performing magician who was the kid winner of the Australian Street Entertainment Championships 2014. Geared for kids and adults, his comedy brings magic to life so make a point to take a peek on the 5th at 12pm and 2pm or on the 6th at 11am, 1pm and 3pm.
Tickets are $15AUD per day for adults, $10 for kids and rugrats (under 4’s) get to toddle along for free. The 2 day pass is $20, kids are $15 and again, under 4 year olds dribble in at no cost. The site also features family day passes at $40 (single day) and $60 (both days).
If you’re in the mood for volunteering and obviously have a free run of the venue at off times, you can check out their submission details for signing up.
Only a 30 minute car drive from an affordable Sydney hotel or 90 minutes by public transport, what a great way to spend a day if you’re on a budget: $15 per ticket and one of the lowest accommodations in the Sydney area. Need more inspiration? Cremorne Point Manor’s website home page shows the incredible Harbour views from the hotel and as a final nudger towards booking a room, they’ve been awarded the Certificate of Excellence by TripAdvisor, for the 4th year in a row! 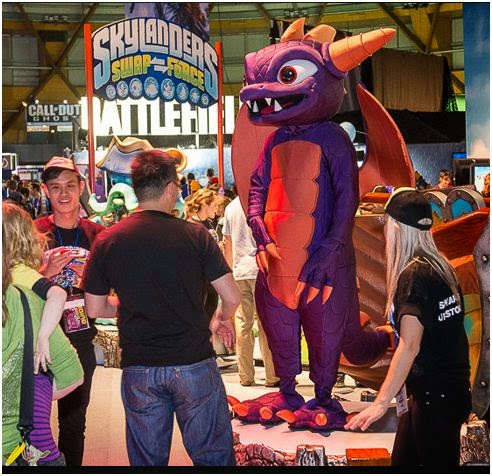 Posted by Mint Bridging at 4:38 PM No comments:

Jazz it up for the Australian International Music Festival

From the 6th to 13th July, an event not to miss is the 25thanniversary of the Australian International Music Festival. As one of the most popular events in the Sydney calendar, you’ll be dancing alongside up to 1,300 other groovers who watch performances by artists from New Zealand, Japan, Singapore, the USA and obviously Australia.


The genres are vast, fast and furious including Orchestra, Choirs, Jazz and Wind Bands. Naturally, the Sydney Opera House is a major host venue but you can also check out other concerts at the City Recital Hall (Angel Palace) and Darling Harbour’s flurry of wine and music bars.
Over these seven days, several museums and cultural hotspots also share the music scene with sound so you can enjoy live performances at the Enmore Theatre and The Basement.  Dance along to Sydney Symphony Orchestra, Simply Red and Diana Krall who perform regularly and maybe groupie star-spot famous artists along the way.
Hosted by World Projects, the festival also awards each ensemble Gold, Silver or Bronze plaques based on their performance. If you’re a budding artist and have generated huge kudos in your field, there’s the Showcase Award category for groups that aren’t competing. It’s enough to dust off your recorder, triangle or glockenspiel, right? For more details, you can email the organizers and maybe you’ll be ready this year or be inspired to compete next year.
Tickets can be purchased at the Opera House with standard prices at $30 AUD which is a pretty good deal since you’ll be watching a huge range of musicians – some famous and some up and comers. At nearly 3 hours per performance, it’s a truly great experience that won’t melt your credit card. Additionally, nearly every music group that enters the festival has the amazing opportunity to play for 20 minutes at the Oprah House or Victorian Town Hall.
On the subject of cash flow, If you’re a backpacker or visiting on business and feeling a slight money crunch, instead of staying at overpriced downtown accommodations, there’s an affordable Sydney hotel just a few minutes ferry ride from the Opera House. At Cremorne Point Manor, boasting four years of TripAdvisors ‘Certificate of Excellence’ Award, you can march to the beat of your own budget drum.  If you also take a look at the Manor’s home page, you’ll see the new tour video and yes, the incredible views of the Opera House from the hotel. Now this is really jive talking!

Posted by Mint Bridging at 1:55 PM No comments:

Well you wish can come true… if you’re aged 11-26 years old and live in North Sydney!  The Hornsby Gang Show is the coolest, most creative annual event in the city where this age range auditions every February to be in the Gang to perform a series of shows. The other stipulation is that they are active local Scout and Guide members and the production includes 150 volunteers who get their prepping act together so everyone’s ready for the 27 June - 5 July shows.


These volunteers hang banners, organize costumes, create the show sets and if you’re a local friend or family of the cast, then volunteer away.
Each year, the Gang creates a completely new show from scratch. This includes forming the original idea of the sketches, the writing, design and production along with rehearsals. Bonding these Gang members over the months leading to the show creates amazing hype in the Sydney area. They’ll meet every two weeks for months and brainstorm ideas, formulate the ideal music to compliment their show and once this is finalized, they’ll start assembling the cast and crew.
The production crew, choreography, singing and acting team then rally together with the orchestra so their extravaganza is rehearsed to a fine art, just in time for you to attend the shows.
Starting out in 1973 as a small concert, they now have progressively accumulated 90 cast members for shows in the past 41 years as popularity has risen. The original concept of the show dates back to the London Gang Show in 1932 by Ralph Reader  who’s produced over 19 Broadway, 34 London West End and 50 Royal Albert Hall performances.
Some of the shows are staged around Australia, inspired by the core Sydney team which has turned into a scouting tradition, worldwide.
There are eight total shows in Sydney this year so if you’re in the area, you can potter down to the Asquith Boy’s High School Theater, Asquith and hope to get a ticket at the door, or go to their booking website and secure your seat. Tickets range from $10.70AUD for kids to family packs (4 people) at $53.80 or individual adult tickets at $20.70 and concessions (students, seniors and disabled) at $15.70.
The show venue is only 30 minutes North West by car from an affordable Sydney hotel. Also remember that Cremorne Point Manor’s just received its FOURTH CONSECUTIVE Certificate of Excellence Award by TripAdvisor. Take a look at our new hotel tour on our website home page… it’s a brilliant performance in itself! 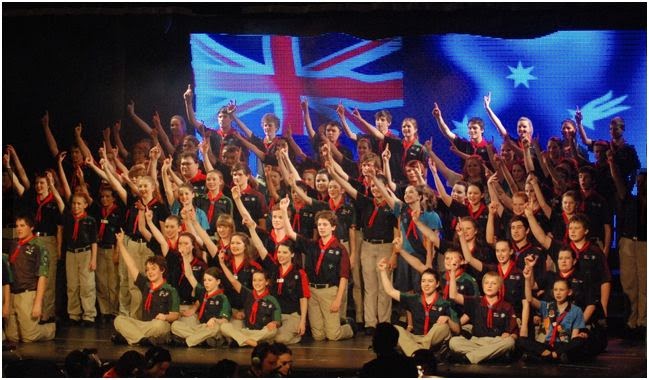 Posted by Mint Bridging at 2:07 PM No comments:

If you’re a huge ‘flick of the wrist’ type of sports fan because tennis is way too exhausting to watch, then you need to be in Sydney 24-29 June. Yep, it’s that time of year for the Australian Badminton Open!

This isn’t just the top Aussie players taking part in this annual competition. It attractions serious movers, shakers and major eye candy including the best-in-their-game competitors from around the globe.
With $750,000 as the winning prize, you bet that the crème de la crème of sports stars will be showing up and knocking each other out, one shuttle cock at a time, to win the tournament. Taking place at the incredible Sports Center in the Sydney Olympic Park, you can also see a buildup of epic games from players who originate from Europe and Asia.
The website is seriously snazzy and shows real time social media activity, details on buying tickets, current news, events related to the Open and relevant badminton hype around the globe.
The ticket are actually quite reasonable ranging from $20 AUD (adults) and $10 for kids for one match or you can buy a 6 day pass for $160 and get ready to watch a major slam dunk of feathers.  A multitude of other price options are available including 3 day passes and remember to account for the ‘inconvenience’ fees for ticket transactions when you’re budgeting on tickets. For anyone on a business trip to Sydney and need to go all-out on entertaining corporate clients, contact the hotline to get corporate/business rates and wow your colleagues with VIP seating.
If you’re slightly running late and miss the opening ceremony games, then the website also has live updates on who’s heading to the next round. The real time results feature how well these international players are doing, including big names such as Lee Chong Wei, Simon Santoso and Nozomi Okuhara.
A really nice element to point out is that if you’re driving, within 27 minutes on the M2 and A3, you can be back at a really affordable Sydney hotel and have a cocktail while you check out the Harbour skyline. Oh, and a finale comment – do you know TripAdvisor has given us a Certificate of Excellence Award FOUR years in a row? Also just check out our new video tour on the home page and you’ll see why Cremorne Point Manor is so popular. Pat on the back to us, right…and watch that birdie fly! 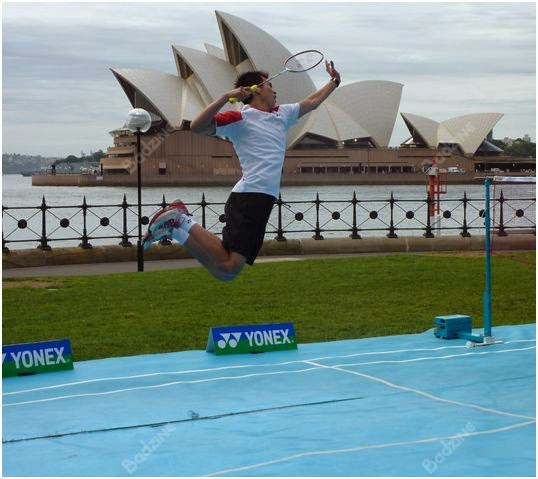 Posted by Mint Bridging at 12:49 PM No comments: